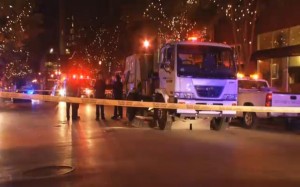 During the early hours of Friday morning on 07/09/2012, a Nashville Public Works Street Sweeper knocked down a drunken pedestrian.

It was suggested that the late night raver was seen taunting the road sweeper which was carrying out road sweeping duties cleaning the roads of the main intersection between 2nd Avenue and Broadway before being sucked under the machine.

The pedestrian was transported to hospital by ambulance and was said to be in a critical but stable condition.

The operator of the road sweeper will not be charged following the incident, however the are possibly charges against the drunken pedestrian.